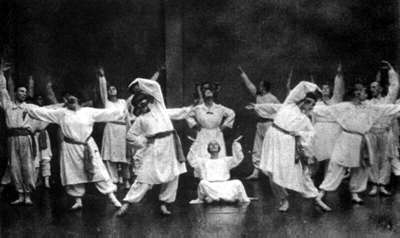 Imagine that in studying the laws of movement of the celestial bodies, let us say the planets of the solar system, you have constructed a special mechanism for the representation and recording of these laws. In this mechanism every planet is represented by a sphere of appropriate size and is placed at a strictly determined distance from the central sphere, which stands for the sun. You set the mechanism in motion, and all the spheres begin to turn and move in definite paths, reproducing in a lifelike way the laws which govern their movements. This mechanism reminds you of your knowledge.

In the same way, in the rhythm of certain dances, in the precise movements and combinations of the dancers, certain laws are vividly recalled. Such dances are called sacred. During my journeys in the East, I often saw dances of this kind executed during the performance of sacred rites in some of the ancient temples. These ceremonies are inaccessible, and unknown to Europeans.

Views from the Real World, p. 31
Glimpses of Truth

In Man as in the universe everything is in movement.

Nothing stays still nor remains the same.

Nothing lasts forever nor ends completely.

Half-hour guided sitting/meditation–no prior experience needed–followed by reading, presentation and exchange relating to the Gurdjieff Work. We have a handful of perennial attendees and have space for more. (Not affiliated with any religion or creed. No one is going to ask you for money) Meet via Zoom if you would prefer.

Half-hour silent sitting/meditation. All welcome. No prior experience necessary. Show up a few minutes early so we can make sure your chair/floor cushion suits you.